Recently I was upgrading vSphere ESXi host from version 6.5.0 (7388607) to version 7.0.1. vCenter for this environment is upgraded to version 7.0.2.0000. at first I was trying to start the upgrade via VMware LifeCycle Manager but that resulted in an error indicating that the vCenter/LifeCycle Manager and the ESXi version where not working well together. In order to make progress I’ve accessed the server via it’s Integrated Lights Out (ILO) interface (HPE). Mounted the HPE ESXi image through ILO and booted the server.

During the upgrade progress the installer finds the drive where ESXi is installed. The next step is that the installer scans the current installation to see if an upgrade is possible. At this point the installer throw’s the following error. 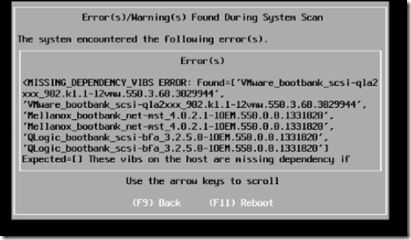 Some investigation through the list the installer is showing here it is clear that these VIBs are for storage drivers that are no longer in use by ESXi.

The correct way to resolve these errors is to remove the unused storage drivers from ESXi. The next step is to reboot (F11) the server. When the ESXi  is completely loaded I connect via SSH (I use the MobaXterm client).

With the following command we retrieve the name of the package:

The output shows that the package is called net-mst.

With the following command we remove this VIB.

After we remove all the VIBS that are mentioned in the above error, the VMware vSphere ESXi upgrade can be restarted.